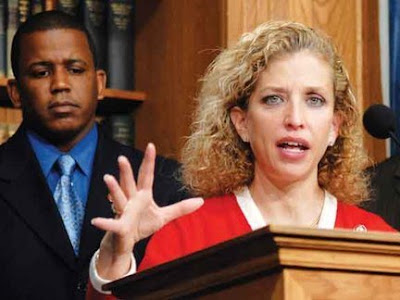 1.  Death trap for seniors:  When Republican Rep. Paul Ryan unveiled his sensible attempt to control government spending, Rep. Debbie Wasserman Schultz hysterically responded by saying, “We see a clear attempt for the government to back out of its commitment to seniors.  As a result, many seniors in America will be forced into poverty, and worse.  Some seniors will end up dying because they are forced to put off getting that pain checked out due to huge out-of-pocket costs that will skyrocket for them.  … This plan would literally be a death trap for some seniors.”

2.  Don’t call it ObamaCare:  Wasserman Schultz asked for a rules clarification on the floor of the House of Representatives, saying Republicans’ use of the term ObamaCare was disparaging to the President.  “Is it a violation of the House rule wherein members are not permitted to make disparaging references to the President of the United States?  In two previous gentlemen’s statements on the amendment, both of them referred to the Affordable Care Act, which is the accurate title of the health care reform law, as ‘ObamaCare.’  That is a disparaging reference to the President of the United States.  … It is clearly in violation of House rules against that.”

4.  Class warfare:  Wasserman Schultz clings to the old stereotype that the Democratic Party represents the common man and Republicans only care about the super rich.  In actuality, Democrats are beholden to the Hollywood elite, academia, gay activists, feminists, and public employee unions—not exactly the Woody Guthrie crowd.  Says Wasserman Schultz:  “We must expose the stark difference between the Democrats fighting for the middle class and Republicans fighting for the elite and the ultra-wealthy.”

5.  Belittling to include military:  When the House Judiciary Committee considered adding an amendment to include attacks against military veterans to hate crimes legislation, Wasserman Schultz said that would be belittling to gays, blacks and Jews:  “I represent one of the largest gay populations in the United States of America.  One of the largest Jewish populations in the United States of America.  Our region has a very large African-American population.  It really is belittling of the respect that we should have for these groups to suggest that members of the armed services have somehow systematically been the victims of hate crimes.”

6.  Global warming death knell:  Wasserman Schultz must have drunk a large portion of global-warming-hysteria Kool-Aid.  Here she is predicting catastrophe for Florida due to rising temperatures:  “The effects of global warming threaten global environmental upheaval over the coming century.  But for South Florida and the Everglades, it could be our death knell if urgent action is not taken.”

7.  Demonizes Tea Party:  Wasserman Schultz held a small rally last year outside the office of Republican Allen West, denouncing the war hero who was running for the Florida congressional seat he eventually won.  Explaining the difference between the expression of her First Amendment rights and Tea Party rallies, she said, “I don’t see any swastikas or any pictures of the President in black face or burned in effigy here.  The difference between the way we express our First Amendment rights and the way I’ve seen Tea Party extremists—Republican Tea Party extremists—express their right is dramatically different.”

9.  Union rabble-rouser:  Wasserman Schultz, in an address at George Washington University, said that Wisconsin Gov. Scott Walker deserved the “organizer-of-the-year award” for energizing public-employee unions after trying to rein in the cost to the state of their lucrative pensions and health care benefits.  “The sleeping giant has been awakened,” she said, according to Politico.

10.  Democrats’ communication problem:  Wasserman Schultz echoes President Obama’s assertion that Democratic election woes are due to not communicating all their accomplishments, not that they’ve pushed unpopular policies.  At her first press conference as DNC chairwoman, she said:  “This past election was tough.  We must do a better job of clearly articulating our accomplishments to the American people.”