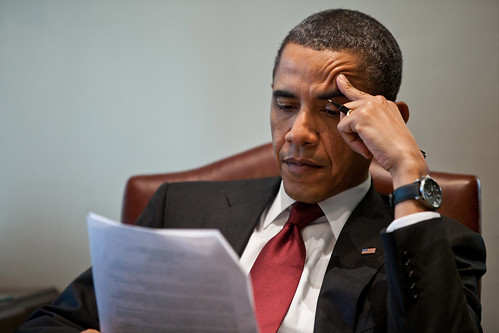 The final budget deal for this year’s government spending specifically cuts some of President Obama’s most cherished liberal programs.  Speaker of the House John Boehner (R.-Ohio) brokered the deal for Republicans to cut spending by $39.9 billion from 2010 levels, which includes the elimination of ObamaCare programs and White House czars.  Boehner struck the final deal with Obama and Senate Majority Leader Harry Reid (D.-Nev.) one hour before the government was set to shut down on Friday.

“Never before has any Congress made dramatic cuts such as those that are in this final legislation.  The near-$40 billion reduction in non-defense spending is nearly five times larger than any other cut in history, and is the result of this new Republican majority’s commitment to bring about real change in the way Washington spends the people’s money,” said Appropriations Committee Chairman Hal Rogers (R.-Ky.) after releasing the legislation early Tuesday morning.  The Appropriations Committee drafted the legislation over the weekend after the late-night Friday deal.

The final Continuing Resolution (CR) cuts this year’s projected budget deficit of $1.5 trillion by approximately 2.6%.  The House will vote on the bill on Wednesday, and then it will need Senate passage and Obama’s signature to fund the government for the remaining six months of Fiscal Year 2011.

The specific cuts in the final budget target liberal or fiscally irresponsible programs targeted by Republicans.  The bill also mandates an across-the-board spending cut of .2% for all non-defense programs, which is on top of the line items listed below in the programs’ cuts.

ObamaCare:  President Obama’s health care law, known as ObamaCare, is scaled back with the termination of two programs—the Consumer Operated and Oriented Plan (CO-OP) and the Free Choice Voucher programs.  Also, the deal includes a policy rider demanding that the Democrat-controlled Senate hold a vote on repealing ObamaCare.

White House Czars:  Four of the nine Obama administration’s “czars” are eliminated.  The czars are in federal positions in his administration, but not confirmed by Congress.

The CR defunds both the salaries and office expenses for the “health care czar”  (director, White House Office of Health Reform), the “climate change czar” (assistant to the President for energy and climate change), the “car czar” (senior adviser to the secretary of the treasury assigned to the Presidential Task Force on the Auto Industry and senior counselor for manufacturing policy), and the “urban affairs czar” (White House director of urban affairs).  The urban affairs and climate change czars have never been filled.

EPA:  The Environmental Protection Agency (EPA) has one of the biggest cuts of all government agencies.  The EPA’s budget is reduced by $1.6 billion, which is a 16% decrease from the 2010 level.  The specific cuts to EPA programs include $49 million  (-13%) from the climate change funding bill and $149 million (-33%)  from the Land and Water Conservation Fund.  Congressional Republicans have been fighting to block the EPA from enacting cap-and-trade policies though its own regulations.

TARP:  While the Troubled Asset Relief Program has already been fully funded, so no new spending will be allocated for the program, the bill increases funding for oversight of billions remaining in TARP programs.  The legislation gives the Office of the Inspector General for TARP an extra $13 million to continue to oversee the billions in TARP assets.  Special Inspector General for TARP Neil Barofsky has testified before Congress on the failure of several of Obama’s TARP mortgage programs and recommended terminating the programs.

State Department and United Nations (UN):  The State Department and Foreign Operations are reduced by $504 million, which includes cutting $377 million from U.S. contributions to the UN.  The bill also cuts funding for the UN Population Fund to 2008 spending levels.

Congress’ Own Budget:  The Republican House, which drafted the CR, cut its own funding by $55 million, which will be taken by reducing every congressional office’s budget by 5%.  The Appropriations Committee, which determined the specific cuts in this legislation, cut its own budget by 9%, taking a larger hit than anyone else.  The Legislative Branch budget, as a whole, is reduced by $103 million.

High-Speed Rail:  The controversial program gets slashed by $2.9 billion this year.  The bill cuts out new funding for building in the mass transportation program and rescinds $400 million in previous year funds.  (In total, Transportation Department programs are cut by $12.3 billion.)

Overall, the final CR budget cuts spending by $39.9 billion from the 2010 enacted spending levels.  The government is still being funded at bloated 2010 levels  because the Democratic Congress did not pass a budget or any appropriations bills last year.  As a result, six, short-term CRs have been passed to keep the government open since the this current fiscal year began on Oct. 1.

Speaker Boehner has demanded that each short-term CR that has passed since Republicans took control of the House this year cut spending by $2 billion a week.  By the time the final budget is signed into law on Thursday, the Republicans will have already cut $12 billion in government spending, so $26.5 billion in cuts will be taken through the rest of the fiscal year, which ends on Sept. 30.

“My committee went line-by-line through agency budgets this weekend to negotiate and craft deep but responsible reductions in virtually all areas of government,” said Chairman Rogers.  “Our bill targets wasteful and duplicative spending, makes strides to rein in out-of-control federal bureaucracies, and will help bring our nation one step closer to eliminating our job-crushing level of debt.”