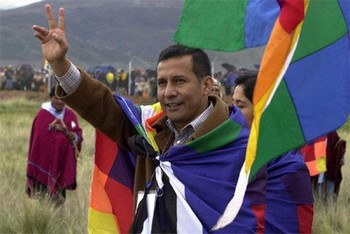 Just when it seemed that the tide of America-hating leftists becoming presidents of Latin American countries had subsided, signs were growing that one of the top two spots in Peru’s presidential election Sunday would go to a close ally of Venezuela’s Marxist strongman Hugo Chavez.

Cashiered Col. Ollanta Humala is, in fact, known as the “Peruvian Chavez.”  In his losing race against current President Alan Garcia in ’06, Humala ran on a hard-left platform of nationalizing private business, income redistribution, and reconsidering all bilateral agreements with the U.S.  When Garcia won by a margin of 51% to 48.5%, he declared that the true loser of the election was Venezuela’s Chavez, who openly backed Humala.

With Garcia termed out this year, polls show support for Humala is surging and it is increasingly likely he will finish first or second in the voting on Sunday and thus end up in the runoff on June 5th.

What would make the runoff a drama of Shakespearean proportions is that Humala might just end up facing the daughter of the president that onetime army commander Humala tried to depose in a failed coup attempt 11 years ago.  Many of the polls that show Humala’s late-breaking surge also show solid support for Congresswoman Keiko Fujimori, whose father, Alberto, was Peru’s authoritarian president in the 1990s.

Overthrown in 2000 after what many thought was a fraudulent reelection to a third term, Fujimori fled to Japan.  He was eventually extradited to Peru, where he was tried, convicted, and sentenced to 25 years in prison for crimes against humanity (and also received a seven-year sentence for embezzlement).  Nevetheless, the Japanese-Peruvian known as “Fuji” still retains a warm following for bringing hyperinflation down to single digets with a market-based economic policy and defeating the feared Shining Path guerillas (who were responsible for the deaths of more than 25,000 Peruvians).

With narcotics-related crimed on the upswing throughout Peru, 36-year-old Keiko Fujimori vows “security and order” and is also articulating a conservative economic agenda.  To no one’s surprise, she promises a full pardon for her father should she be elected.

There are three other major candidates, including former President Alejandro Toledo, who lost the disputed election to Alberto Fujimori in 2000 and was elected to succeed him a year later.  The other two are economist Pedro Pablo Kuczynski, an Oxford-educated former prime minister, and Luis Castandeda, who was mayor of Lima for two terms.  All are considered capable and well-grounded in economics, but, in a country where more than half the population lives outside major cities and is below the poverty level, none are thought to have the following among the poor that either Humala or Keiko Fujimori is showing.

It is no secret in official Washington that, with issues ranging from trade agreements to fighting the war on drugs bringing the U.S. closer to Peru, no one wants to deal with a “President Humala.”  Although the former army officer has distanced himself from Chavez in this campaign and says he accepts some market-based policies, many still vividly recall his ’06 vows to nationalize infrastructure, industrialize the production of coca (the raw material for cocaine), and rewrite the contracts of all international companies that extract natural resources in Peru.

If Ollanta Humala sounds hauntingly like Hugo Chavez or Bolivia’s Evo Morales or Nicaragua’s Daniel Ortega, that is reason enough to pay close attention to the voting in Peru on Sunday.  And if the “Peruvian Chavez” comes in first or second, then Washington will undoubtedly be wondering whether he can be stopped on June 5.