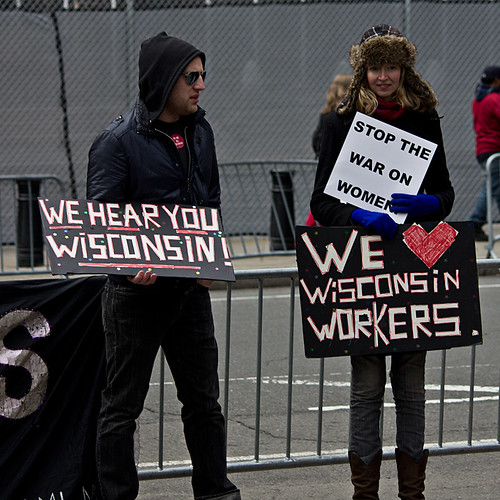 An unusual rally was held over the weekend in Wisconsin, in which the AFL-CIO acted to protect government subsidies for Planned Parenthood.

What does the nation’s largest abortion provider have to do with organized labor?  Well, for one thing, pimps and underage illegal immigrant prostitutes are not currently unionized, and as they are evidently faithful customers of Planned Parenthood, the unions may see an opportunity to organize them.

The stated purpose behind the rally was solidarity.  “As we stood up to the right-wing assault on working families,” said Phil Neuenfeld, president of the Wisconsin AFL-CIO, “you could always see as you looked out, no matter the size of the crowd… the pink signs saying ‘I stand with Planned Parenthood.’  It’s about standing together.”

Collectivist organisms wield power through such gestures of solidarity.  Neuenfeld’s organization, contrary to his tired rhetoric, is entirely concerned with subjugating “working families” and forcing them to pay for union benefits.  Doing this requires political influence, which the union expresses through the Democrat Party.  Democrats must obey the union bosses, and win elections against Republicans, in order to deliver value to the unions.  Planned Parenthood helps Democrats win elections, and a show of strength alongside union forces encourages Democrat politicians to obey their instructions.  Do you suppose it’s easy to persuade elected politicians to humiliate themselves by fleeing the state and hiding in motel rooms?

What about union members who are pro-life, or at least queasy about those Planned Parenthood abortion mills, or who don’t like the idea of a bankrupt government pouring money into a very profitable corporation?  Tough.  They belong to the union, which means they belong to Planned Parenthood, and they support its agenda.  That’s how collectivism works.  There is a procedure for union members to “conscientiously object” and divert their dues to a charity, but it’s a difficult administrative process, and the union boys will be happy to give reluctant members plenty of reasons not to follow it.

Besides furnishing collective political power, Planned Parenthood is a money-laundering operation for Democrats.  The scale is much smaller than the indispensable tide of taxpayer money rinsed through unions and pumped into Democrat coffers, but it’s still significant.  As Representative Mike Pence (R-IN) points out in a National Review editorial today, Planned Parenthood has annual revenues exceeding one billion dollars, with $363.2 million “coming from taxpayers in the form of grants and contracts.”

Money is fungible, so every dollar received in federal grants and “earmarked” for other purposes frees up a dollar for abortion services… and a dollar for political contributions.  According to Open Secrets, “Planned Parenthood-related political action committees donated $384,886 to federal-level candidates in the 2010 election cycle.  Additionally, Planned Parenthood spent about $906,000 making independent expenditures in support of, or in opposition to, federal political candidates during the most recent election cycle.  Planned Parenthood’s national organization also spent just under $600,000 on lobbying expenditures.”

Unions are the primary conduit for converting taxpayer money into Democrat campaign cash.  Big Abortion is a smaller, but not insignificant, pipeline.  Both organizations harvest political power from people who support them for idealistic reasons, and neatly package that power for delivery to their chosen political party.  That is one reason why union troops are willing to stuff members who don’t necessarily support the Planned Parenthood agenda into pink T-shirts, and lead them in chants to defend compulsory taxpayer funding for Big Abortion’s biggest and most lucrative operation.

Boots On the Ground