We finally know what Barack Obama meant when he kept talking about “shovel ready” projects.  It wasn’t to boost our sagging economy and shrinking labor force.  Nah.  By shovel ready, Barack meant unloading a pile of manure into our faces while telling us it’s cookie dough ice cream, of the homemade variety.

Forget for a moment that Obama premised action in Libya on the fulcrum that “the United States of America has played a unique role as an anchor of global security and advocate for human freedom,” which pretty much validates George W. Bush’s Iraq policy, the same policy that state Sen. Obama called a “dumb war” and that he frenetically played up in order to create early separation between him and Hillary Clinton in the 2008 primaries.  Yeah, disregard that for now.

Obama’s entire speech last night was aimless, peppered with contradictions, and left us wondering, “Hmm.  It’s still not clear why we’re bombing the snot out of Libya.”

From the mouth of the President last night:  “I refused to wait for the images of slaughter and mass graves before taking action.”

Really?  Our friend Jim Hoft put together a list of photos of, er, totalitarian regimes slaughtering protesters in the streets under Obama’s watch while the President did absolutely nothing.

Here’s Neda.  Recall, she’s the young Iranian woman who was shot in the chest by a Basij militiaman for protesting Iran’s fraudulent elections in 2009. 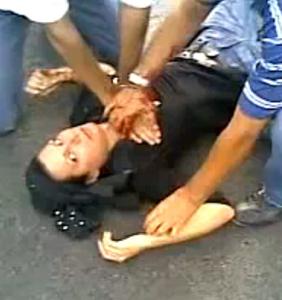 In fact, many of those protesting Iranian President Mahmoud Ahmadinejad’s rigging of the ballots were rounded up, beaten, and butchered.  Obama wasn’t moved.  Far worse, he’s chosen to play patty-cake with Iran, begging the country, pretty please with sugar on top, to halt its nuclear ambitions and terrorist activity.

And then there’s Syria , where, according to local witnesses, pro-government “forces opened fire on hundreds of youths on Wednesday who were marching in solidarity with protesters attacked at a mosque complex hours earlier.”

Or how about the Yemeni authority’s brutality:

Bahraini tanks on the move to mow down protesters?

The point is that what’s going on in many different countries in the Middle East right now is of humanitarian concern.  But is it of U.S. concern?

On Libya, Robert Gates, our secretary of defense, says it’s not, noting Sunday on ABC’s “This Week” that America doesn’t have a “vital national” interest there:

Yet one day later, Obama tells the nation that Libya is, in fact, our problem:

“… when our interests and values are at stake, we have a responsibility to act.”

Which one is it, guys?

The public confusion is one thing, but blatantly playing loose with the facts is entirely different.

Of Obama’s insistence that NATO will take over command operations, the Associated Press’s fact-check team had this to say:

The United States supplies 22% of NATO’s budget, almost as much as the next-largest contributors—Britain and France—combined.  A Canadian three-star general was selected to be in charge of all NATO operations in Libya.  His boss, the commander of NATO’s Allied Joint Force Command Naples, is an American admiral, and the admiral’s boss is the supreme allied commander for Europe, a post always held by an American.

So the U.S. will end up running and paying for the bulk of this military adventure after all.  Lovely.

To his credit, Obama did tell us in his address on Libya that we’re “going after al-Qaeda around the globe,” except he left out the fact that the Gadaffi opposition we’re assisting is also being aided by and is linked to al-Qaeda.