Tips for a Trip to the Top

[This article was originally published in the March 28th issue of HUMAN EVENTS newspaper.]

Last week, I gave advice to Mitt Romney, Mitch Daniels, Haley Barbour, and Tim Pawlenty on how they could win the 2012 GOP presidential nomination.

In this week’s column, I offer advice to Mike Huckabee, Newt Gingrich, Jon Huntsman, Sarah Palin, Rick Santorum and Herman Cain on how they can emerge from this cycle as winners even if they do not get the nomination. 1. Mike Huckabee: Convince Establishment He Can Take Down Palin

Huckabee leads the GOP field in many early polls. Some of these polls have also shown him defeating Obama in a one-on-one matchup. Granted, these polls do not say much this early in the process, but they still represent a snapshot. In addition, it is a fair assumption that, should Huckabee not run, his voters would more likely gravitate towards a candidate like Palin, should she run, than some of the more establishment-oriented candidates. It is also not a well-kept secret that many members of the Republican establishment, particularly high-dollar donors, do not particularly like Huckabee. And while the most conventional advice to Huckabee may be for him to become more disciplined, I suggest this: Since Huckabee needs money to mount a serious presidential run, he should convince establishment donors who may not like him that he is the best candidate to cut into Palin’s support so they should bankroll his campaign. This may be a situation where the enemy of my potential enemy is my friend. Of all the potential candidates, no one has had more dynamic ideas than Gingrich. But whether he likes it or not, his wife Callista, who has been with him at every appearance and is splashed prominently on his web page, may distract voters and remind them of his past, taking away from his true strength: his ideas.

Running a campaign without using Callista in any of the optics would eliminate distractions, make his ideas come to the fore and may give him a better chance of winning the nomination.

Sometimes, the best way to win a cycle is by not running at all. Huntsman can be for Mormons what Obama was for blacks and what Obama was to Democrats for Republicans: essentially a post-modern candidate who defies the stereotypes associated with those like him. But this is not the cycle for the Huntsman brand.

If he chooses to mount a presidential campaign after resigning from the Obama Administration, Huntsman will risk much more than he has to gain.

If he jumps into the 2012 cycle, even if to try to set up a 2016 run, he risks his potential star’s being forever dimmed. She will get more press initially by not being at the early debates and her absence will potentially allow her to say that she has surveyed the field and finds none of the candidates satisfying, so she is offering up herself to the electorate to improve the country. Of course, some in the GOP establishment are baiting her with the prospect of becoming “kingmaker for life” because they desperately want her to sit out the nominating process.

And though Palin can jump in the race the latest of any candidate and freeze the whole field until she makes a formal decision, my suggestion would be for her to jump straight into the race on the 4th of July without first forming an exploratory committee, which she can say is done only by those in the Washington establishment.

There are two reasons for this. First, besides the patriotic aspects, July 4th would be symbolic because it would mark the weekend that she resigned the Alaska governorship and her disjointed speech then was panned not for the message but for the way in which it was haphazardly delivered. She can symbolically get a do-over.

He has the potential of being the darling of those who identify themselves with the Tea Party. He may have some latent support in the early primary states that is not on the mainstream media’s radar. His best strategy may be to try to secure himself the vice presidential nomination. Should a more establishment candidate win the nomination, that candidate’s first goal will be to make sure a Tea Party candidate does not run as a third-party candidate and siphon off voters from the GOP much in the way Ross Perot did in 1992. Moreover, for those in the party who have their eyes on 2016 and do not want to see a potential 2016 competitor get a head start on that race by being the vice presidential nominee in a party known for supporting candidates whose turn is next, Cain could be a non-threatening vice presidential pick.

Santorum had a rather inauspicious exit from the national political stage when he lost his Pennsylvania Senate seat to Robert Casey. I don’t know if there is a plausible path to the nomination for Santorum. But his staunch socially conservative message will play well in some early states, and perhaps he could emerge from this cycle as an effective leader or spokesman for social conservatives. In recent years, social conservative leaders have underserved their constituents, who make up much of the backbone of the party and comprise many in the conservative movement. A strong showing this cycle could catapult Santorum into being an effective and credible spokesman throughout the decade. 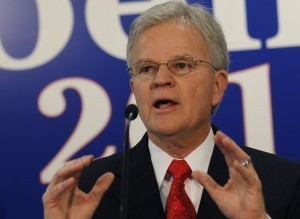 He may rail against Washington’s being a “boomtown,” but former Louisiana congressman and governor Roemer can come out a winner in two ways. Ironically, it is the same members of the Washington “boomtown” that love his homespun tales and give him free publicity, which may allow him to cash in and achieve a higher profile through this cycle. Second, his “us against them” oldschool Southern populism may remind the GOP to be more Main Street than Wall Street, to focus more on pitchforks than derivative traders. This would be consistent with the ethos of the loosely defined Tea Party movement.

Syria Deploys Army - Clinton Says US Will Not Intervene