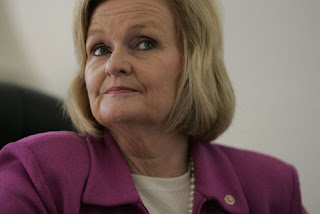 Even before the stunning revelation last week that Sen. Claire McCaskill owned a private airplane for which she owed more than $287,000 in back taxes, the Missouri Democrat was already in political hot water.

In fact, to call the freshman lawmaker and narrow ’06 winner one of the most vulnerable of the 23 Democratic senators facing the voters next year was no exaggeration.  In the last polls conducted before the story about the unpaid taxes broke, McCaskill (lifetime American Conservative Union rating: 18.67%) was shown in a near-tie or slightly ahead of any of the announced Republicans or those considering the race.

Steelman and Martin are the only two announced Republican contenders so far.  Considering the race are stalwart conservative Rep. Todd Akin and former Republican National Committee co-chairwoman Ann Wagner, who lost a bid for RNC chairman earlier this year.  PPP showed McCaskill in a statistical tie with Akin (45% to 44%) and defeating Wagner 45% to 36%.  (Missouri GOP sources tell HUMAN EVENTS that if Akin opts for a Senate race, Wagner will change gears and run for his open House seat).

The figures become all the more dramatic when one realizes that the poll was conducted before what is increasingly being referred to as the “airplane scandal” broke a few days ago.  However, the Cook Political Report newsletter changed the rating of the race yesterday from “Leans Democratic” to “Toss-up.”

And Republicans are having fun reminding the press that, five years ago, when she came under fire from then-Sen. Jim Talent (R.-Mo.) on charges she had gone easy on her husband’s business while she was state treasurer, McCaskill retaliated with a TV spot in which she looked right into the camera and said:  “And we have paid every dime of our taxes.”

In all likelihood, McCaskill won’t be running that spot again as she seeks reelection next year.