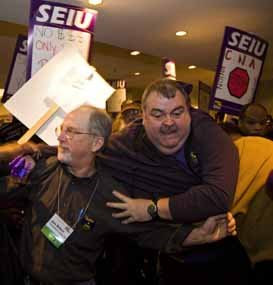 For the life of me, I still don’t get why so many unions don’t realize that acting like untamed beasts in public hurts their cause for amassing widespread support for their agenda.  In Wisconsin, for instance, not only did we see union supporters marching around the state capitol as a herd of cows, but they were harassing state senators at their offices and homes as well.  There were also the death threats.

Now comes a story from northeast Pennsylvania, where hordes of Service Employees International Union (SEIU) fanatics stormed a bank demanding to speak to its CEO. When the request was rebuffed, the hooligans erupted into the mindless chants of “Respect our vote” and “We’ll be back.”

The drama unfolded because the CEO of ESSA Bank is also the chairman of the board of the Pocono Medical Center.  According to local reports, SEIU reps are indignant over the board’s position that union membership and dues shouldn’t be “compulsory.”  Allowing workers the choice of whether or not to join the union isn’t a viable option apparently.

So say the protesters anyway.  That’s why they brought their bullhorns on to private property.

Yes, I know, union organizers and their sheeple believe such tactics will intimidate management into capitulation.  And sometimes it does work.  But these unhinged tactics are clearly coming at a price, as support for labor unions has plummeted.  If I were offering the SEIU’s leadership advice (and I’m not), it would be to ensure its members don’t act as though they were just released from the zoo.

As an aside, the girl at the end of the video who’s talking to a police officer is kind of cute, no?  Too bad she’s a leftist drone.  Sigh.