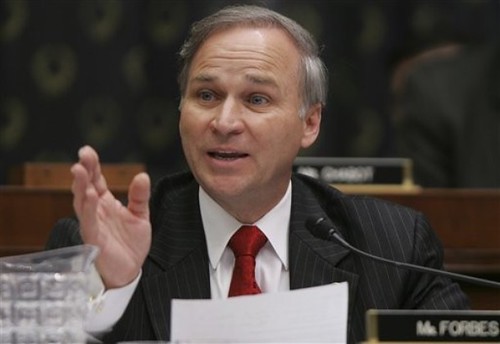 Rep Randy Forbes (R.-Va.) has spent four years fighting to have Congress officially support the right to have the national motto “In God We Trust” in government buildings and public schools.

Forbes won a big victory on Thursday when the House Judiciary Committee passed his In God We Trust Resolution, which reaffirms the national motto and supports and encourages the public display of the motto in all public buildings.

Forbes is pushing this legislation because of a recent cultural shift in America to keep God out of public and government institutions.

“This sends a clear message to all these government departments and agencies that it’s all right to put up the motto on our buildings and in our classrooms.  And I think it will stop the tide of the chilling effect over the past several years,” Forbes said in an interview with HUMAN EVENTS.

“We’re not forcing anybody to do anything,” said Forbes.  “But at the same time, we want to stand there to protect people who want to say God in a public building.  And we don’t want some government agency telling them that they can’t put the national motto in their buildings or classrooms.”

Congress voted in 1956 to make “In God We Trust” the nation’s official motto.  A year earlier, Congress passed a law that mandated the phrase be on all coins and currency.  President Eisenhower signed the currency bill into law in 1956, and since then all American paper money and coins have the motto on them.

“This is not just about Christians.  This is about a number of different religions across the country,” said Forbes.  “We simply recognize the importance of God in this country, all the way back to the Declaration of Independence, through all the Presidents, to the Supreme Court, to the actions of Congress, and the actions of the Senate.”

Forbes points to specific recent events that drive him to give statutory assurances to the public that they are both allowed and encouraged to put the national motto on government buildings.

Last November, President Obama gave a speech in Indonesia in which he wrongly cited the national motto.  “In the United States, our motto is E pluribus unum—out of many, one,” said Obama to Indonesian university students.

Forbes said that by giving “the President a resolution like this—that shows that the House of Representatives knows what the motto is—we can just encourage him to be correct the next time that he is giving speeches.”

In 2007, the U.S. Mint struck an unknown number of George Washington dollar coins without the motto “In God We Trust.”  The mint later restored the motto, but put it in small script at the edge of the coin, instead of its previous location on the coin’s face.

Forbes said that of all the events eroding the motto in public building, the cause  “culminated in the case of the new Capitol Visitor Center.”  When the U.S. Capitol’s new Capitol Visitors Center was set to open in 2008, the motto “In God We Trust” was left off the building.

They tried to keep ‘In God We Trust’ out of the visitor’s center,” said Forbes.  “At first, they put in stone:  ‘Our national motto is E pluribus unum.’  And then they did a mock-up of the Speaker’s podium.  And where ‘In God We Trust’ is on it, they replaced it with just stars.”

Outraged members of the House and Senators intervened on the issue, which came to a vote in the House in 2009.  The bill which directed the architect of the Capitol to engrave “In God We Trust” in a prominent place in the building passed by a vote of 410 to 8.  The Senate passed the same bill, and as a result, “In God We Trust” was engraved in the main foyer.

These and other events inspired Forbes, who is the founder and chairman of the Congressional Prayer Caucus, to push for the House to reaffirm the national motto.

“The most important thing that we want to establish is not whether or not you are a Christian, but we have to stop the tide that suggests that America has lost its right to trust in God.  I don’t believe it has lost that right.  I think it still has it.  We just want to make sure that we are there to protect it and defend it,” Forbes said to HUMAN EVENTS.

The Senate passed a reaffirmation of the motto in 2006, but because it was late in the term, there was not time to bring it up in the House.

In 2007, the Democrats took back control of the House and Rep. John Conyers (D.-Mich.) became chairman of the Judiciary Committee.  Conyers, who was one of eight who voted against putting the motto in the new Capitol Visitor Center, refused to allow a committee vote on the In God We Trust Resolution.

As the Republicans were poised last year to take back control of the House, Forbes started lobbying Lamar Smith (R.-Tex.), who would be chairman of the Judiciary Committee in a GOP House.

“I spoke with Chairman Smith last year.  He was kind enough to write me a letter which said that, if we gain control of the House, the reaffirmation of the motto would be one of the first piece’s of legislation that would be brought up,” said Forbes.  “And he honored that commitment.”

During the committee hearing on Thursday, Smith said the bill “provides Congress with the opportunity to renew its support of a principle that was venerated by the Founders of this country, and by its Presidents, on a bipartisan basis.”

Forbes has not spoken yet to House Majority Leader Eric Cantor (R.-Va.) about the timing of the bill, but said that he “would expect it to be on the floor in two or three weeks.”

The Majority Leader determines the floor schedule and timing of votes.  Asked about the Forbes bill, a Cantor spokeswoman would not commit on the April timing that Forbes expects for a vote.

“Eric agrees with the intent of the resolution and it may come to the floor in the coming months.  However, as you know, there are many other substantive policy items that are going to need floor time,” said Cantor’s spokeswoman.

“We don’t view this as a partisan bill at all,” said Forbes.  “I think when you see it on the floor, there will be a lot of Democrats who vote for it.”

Francis Scott Key coined the original phrase “In God is our trust” in a poem in 1814.  Key’s early variation evolved over time into “In God We Trust.”

Key wrote the words while witnessing the British bombard Fort McHenry in the Baltimore harbor in 1814.  Key’s poem was later made into a song and became the U.S. national anthem, renamed “The Star-Spangled Banner.”  The U.S. national motto came from Key’s words in the last stanza of his poem:

“Then conquer we must, when our cause it is just,
And this be our motto:  “In God is our trust.”
And the star-spangled banner in triumph shall wave
O’er the land of the free and the home of the brave.”