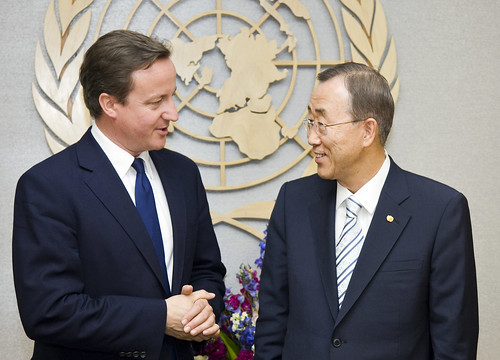 An agency spent $517 million to promote industrial development in impoverished areas, but an official review “could not find any evidence” it had “a significant impact” on poverty, so the government will cut its funding.  Another agency blew $396 million to “promote socially and environmentally sustainable cities,” but no evidence could be found that it was working “coherently” to “tackle urban challenges.”  A billion dollars was poured down the rat hole of an agency that oversees labor standards.  A $28 million disaster relief program is a disaster that won’t receive another dime.

Are these triumphs of congressional Republicans, fighting to bring fiscal sanity to an out-of-control federal government?  No, these are the findings of the British government, as it moves to defund four agencies at the United Nations.  Prime Minister David Cameron has put three other agencies on notice that further funding will be contingent on improvements in performance.

It’s amazing to see the British, of all people, taking the lead in slashing UN funding.  Happily, U.S. Republicans are right behind them.  Rep. Ileana Ros-Lehtinen of Florida is especially keen to cut funding to the UN Human Rights Council, which uses taxpayer money to produce reports praising the human-rights achievements of countries such as …  Libya .

Earlier this year, Ros-Lehtinen declared her desire to “kill all U.S. funding for that beast,” which she described as “a rogue’s gallery of pariah states.”  Supporters of funding for the Human Rights Council say we need to keep forking over cash to maintain our influence.  It’s sad that anyone would think the United States, the greatest humanitarian nation in the history of mankind, has to pay for the privilege to speak out on human rights.

The inefficiency and corruption of the United Nations come as no surprise to those who don’t allow idealism to prevail over common sense.  Any large organization becomes more corrupt and unaccountable as it moves further from those who provide its revenue stream.  The UN could not be further removed from taxpayers around the world who provide its funding—especially American taxpayers, who cover 22% of the “core” funding and kick in enough
“voluntary” spending to get their final invoice over $6 billion per year.

It’s tough to envision an organization that would be less effective, as a matter of design.  By giving squalid little dictatorships a seat at the table with enlightened nations, it mixes the delicate china of democratic sensibility with the iron will to power.  The result is a system that spends most of its time lecturing the few nations that will take it seriously, not the ones that most need to be reprimanded.  The fusion of environmentalist religion with UN authority produced a global vacuum cleaner stuffed into the wallets of nations with the best environmental records in the world.

Every oppressed, starving, and wounded victim in the world has learned to shudder at the sight of UN blue helmets.  Hope arrives in the form of the Stars and Stripes, riding on the shoulders of American soldiers.  We’re long past the point where we should be wasting billions on global agencies that mostly need to stay out of our way when disaster strikes.  We certainly can’t afford to continue allowing an inert Obama administration to subcontract our foreign policy to the UN.  The British have given us a good lead to follow.

Ricochet: This Week at HUMAN EVENTS