Jeb Bush in Danger of Missing the Boat

[This article will appear in the March 7th issue of HUMAN EVENTS newspaper.] 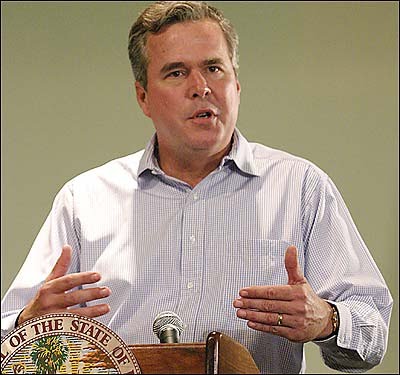 Former Florida Gov. Jeb Bush appeared with President Obama on Friday at an education event in Florida, which may be a clear signal that he has no intention of actively seeking the GOP presidential nomination for 2012, as he and his advisers have repeatedly gone on the record to say.

In fact, the last former Florida governor who appeared with Obama, Charlie Crist, had to leave the Republican Party when his symbolic embrace of Obama was relentlessly used against him by movement conservatives and Marco Rubio during the 2010 Senate primary in Florida.

While Bush may have his eyes on 2016, his best shot of becoming President, if he wants to, may in fact be this cycle.

If Bush does not get in the race this year, he risks becoming the GOP’s version of Hillary Clinton—a candidate whose preoccupation with a last name caused history to pass her right by.

The landscape that was ahead of Hillary as she approached 2004 is similar to what is now in front of Jeb.

During the 2004 cycle, Hillary was apprehensive about running against George W. Bush because she thought the country still had Clinton fatigue.  In 2000, W. ran as much against Bill Clinton as his did against Al Gore.  Even Gore kept Bubba at arm’s length because he believed Americans were tired of Bill’s double speak, slickness, and how the first baby boomer President stained the office of the Presidency with his boorish and undisciplined behavior.

Compounding matters for Hillary in 2004, the Democratic slate of candidates was extremely weak.  Howard Dean was a firebrand whom the establishment hated and many felt would get crushed in a general election.  Dick Gephardt had a great life story but was rather milquetoast.  John Kerry was a boring establishment candidate whose idea of charisma seemed to be winning obscure debating points on technicalities.  John Edwards gave inspirational speeches about poverty and being the son of a mill worker.  And though Edwards probably would have given Democrats their best chance of beating Bush in a one-on-one contest out of these four candidates, he had trouble convincing people he had the requisite depth and gravitas to become the party’s nominee.

As the book Game Change reveals, because of this weak field, Hillary was actively considering jumping into the race at the last minute.  And some of her closest advisers, even those who were then employed by other campaigns, were testing the waters for her.

In the end, Hillary sat 2004 out, and her best chance of becoming President may have passed her by.

Jeb faces similar problems as those Hillary did in 2004.  Consider:  In 2008, Obama ran as much against George W. Bush as he did against John McCain, tying the last years of the Bush administration around McCain’s neck like an albatross.  Many political experts think it is too soon for voters to embrace another Bush at the top of the ticket.

And if this week’s events prove anything, the potential 2012 GOP field may be as lackluster as the 2004 Democratic field was.

As of this printing, Herman Cain, a former talk radio host and businessman, and former Louisiana Gov. Buddy Roemer are the only two GOP candidates with exploratory committees.

Newt Gingrich and Rick Santorum have had their Fox News contracts suspended because both show signs of starting exploratory committees, with Gingrich having announced the first steps of an exploratory phase on Martha Zoller’s radio show on Thursday.

Mike Huckabee is the front-runner in many early—and rather meaningless—polls, and Sarah Palin attracts more buzz than any other candidate.  Both, though, do not have the trust of the establishment class.  While Palin has the most fervent supporters of any of the potential candidates, and as a result, is the candidate who least needs the GOP establishment’s infrastructure, the establishment class loathes and disdains her.  This was symbolized and made evident when it was revealed this week that Karl Rove openly mocked Palin during an interview with New York magazine.  Unlike Huckabee, though, who one presumes would need the establishment’s money, Palin seems positioned to build an infrastructure outside the establishment should she choose to throw her hat into the 2012 ring.

Other potential candidates are struggling to find their niche or a theme that catches fire.  They include the swashbuckling Haley Barbour, who truly loves being in the political arena, Mitt Romney, who often struggles in trying to present his managerial strengths without coming across as out-of-touch, and Tim Pawlenty, who, like Gephardt in 2004, has a compelling life story and a fiscal record as Minnesota’s 39th governor that is practically conservative and sterling, according to organizations such as the Cato Institute, but comes across as bland.

And two of the more intriguing candidates, Governors Mitch Daniels and Chris Christie, may not even run.  Christie told a conservative publication that he thought he could win the nomination and the presidency, but was not ready to be President.  Daniels has a quiet charisma that could be a dynamic contrast to Obama’s hype, but questions remain about whether, if he in fact chooses to run, he can make it through the GOP primary.

Without a consensus candidate and a party looking to rally behind one in anticipation of eagerly taking on Obama, Jeb could be in a prime position to not only unify the establishment and the base during the primary season, but also to be the candidate best suited to reach out in the general election to a growing Hispanic electorate whose influence and clout will continue to grow in national elections.

It has been observed that Jeb is as reliant on his head as his brother George is reliant on his gut.  To George’s credit, he saw his opening in 2000 and took it, much the way Bill Clinton did in 1992 against George H.W. Bush, and Obama did in 2008.

Fortune favors the bold, and If Jeb— like, Hillary, another politician accused of thinking too much—overanalyzes the landscape in 2012 and does not take the opening that is presenting itself to him, his time may pass, and the next Bush that the media will hype as a potential presidential candidate may well not be him, but rather his son, George P. Bush.