Connect with us
History has shown that paying ransom, then bloody vengeance, is the only deterrent to terrorists who take human captives. 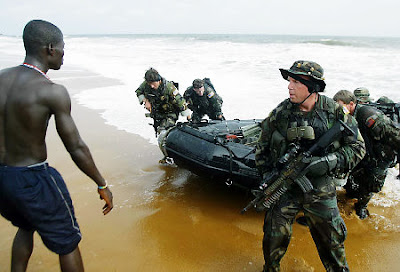 There is an old chestnut that often resurfaces when Americans are taken hostage:  Emulate Thomas Jefferson’s resolute dispatch of forces to free hostages held by the Barbary pirates.  Yet the historical truth is quite different, and explains why Somali pirates have killed American hostages with impunity.  The depressing reality is that in our republic’s earliest years, most hostage crises were resolved by paying tribute money, even when military force was also used.

The fabled taming of the Barbary corsairs by Thomas Jefferson—“to the shores of Tripoli ” in the Marine Corps hymn—was accompanied by a $60,000 ransom (around $850,000 today) to the Dey of Algiers.  In 1904, Teddy Roosevelt, legendary Rough Rider he, paid $70,000 ($1.7 million today) to free Ion Perdicaris, an American diplomat kidnapped in Greece and taken to the Barbary Coast.  Conveniently forgotten was TR’s first message: “Perdicaris alive or [the bandit] Raisuli dead.”

The 1979 to1981 Iran hostage crisis ended with the release of 52 U.S. embassy personnel on the eve of Ronald Reagan’s inauguration, with President Carter greeting the hostages when they touched down in Europe.  Though it is plausible to believe that fear of possible military action ordered by Ronald Reagan played a role in securing the hostage release, the Carter administration unfroze Iranian assets to consummate the deal.  That action was upheld in 1981 by the Supreme Court in Dames & Moore v. Regan.  The high court dismissed a $3 million lawsuit from private firm Dames & Moore against Treasury Secretary Don Regan, filed to recover a debt incurred by the Shah of Iran’s government.

Ronald Reagan’s two terms were marked by the serial taking of hostages by Islamic terrorist groups in Lebanon, with military force held in abeyance.  The Iran-Contra arms-for-hostages deal was a desperate attempt by Reagan to secure the freedom of hostages still held in Lebanon.

European governments have paid ransom too.  All Western leaders feel intense pressure to capitulate and pay tribute rather than use force and risk losing the lives of hostages.  Pressure is amplified by television coverage stressing the human plight of the hostages.  What then can the West do—most of all what can America do, as its citizens are the prime targets of hostage-takers?

Even Israel has ransomed not only live hostages but also dead ones, releasing terrorists who had committed hideous crimes in exchange for corpses.  But there is a better way.

America should take a page from the Evil Empire’s playbook, specifically how the former Soviet Union handled one hostage-taking episode.  In the late 1980s, Russians were taken hostage by one of Lebanon’s countless Arab militia groups.  The Russians paid ransom and the captives were freed.  Then the Russians did what our allies and we have yet to do:  They sent in Spetznaz commandos, akin to our special forces but, unlike ours, stone-cold killers.  Their commandos found the perpetrators and, to put it delicately, rearranged their body parts in killing them, circulating the gruesome photos of their handiwork throughout Lebanon.  No more Russians were taken hostage in Lebanon.  Barbaric, but effective.

One wonders how many fewer episodes of hostage-taking in the Mideast would have taken place if, after the hostages were freed in January 1981, President Reagan had sent the Marines in to hang the Iranian hostage-takers high.  He might have risked impeachment by a Democratic House of Representatives infatuated with liberal concepts of international law.  Likely the American public would have supported the action, and a Republican Senate would not have voted to remove Reagan from office after he had won a landslide re-election.

Short of doing that, any President can declare that Americans living in or visiting dangerous places, which Lebanon assuredly was in the 1980s, stay there at their own risk.  Then the government can refuse to negotiate for release of any hostages taken.  But when Americans are killed overseas, it is best to avenge their killings.  Such action is complicated in the case of the Somali pirates, because the Somalis hold more than 700 hostages.  Had they been dealt with a few years ago—through destroying their camps and ports of egress and sinking pirate vessels on sight if they refused to surrender, there would be far fewer hostages, if any, today.

In 1815, Commodore Stephen Decatur led a punitive expedition to defeat the corsairs, and they left us alone for the rest of the 19th century.  A repeat of that episode is called for.  We will earn the right to be taken seriously if and when an American President has his naval commander say, upon finding pirate ships, what Adm. George Dewey said upon entering Manila Bay in 1898:  “You may fire when ready, Gridley.”

A General Strike In Wisconsin?

John C. Wohlstetter is a senior fellow at the Discovery Institute. His latest book is "Sleepwalking With The Bomb."