[This article first appeared in the February 21st, 2011 issue of HUMAN EVENTS newspaper] 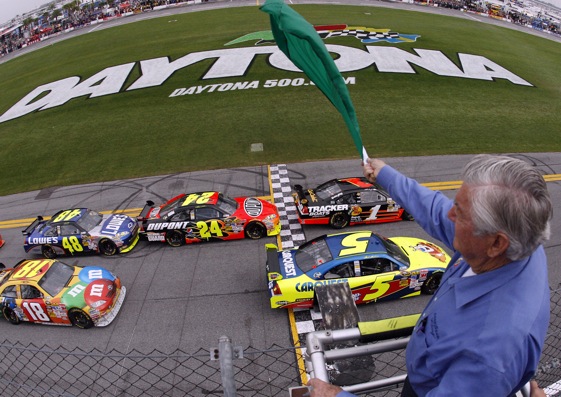 Welcome to the launch of my new weekly column on the 2012 presidential election.   This space is called The Chase because when I think about the presidential nomination process, it seems less like the hackneyed “horse race??? and more like NASCAR.   So it seemed appropriate to raise the proverbial green flag on this column the week the NASCAR season begins with the running of the Daytona 500, otherwise known as The great American Race or NASCAR’s Super Bowl.

This column will analyze an aspect of the Republican presidential nominating process and strive to shed some new light on this frenzied process.   Much that is written about this topic in other publications is long and heavy on process and minutiae about obscure staffers and hires while being short and thin on analysis, strategy, and deducing what events mean on a broader scale.   A good motto I would like to use for this space is, “Stand athwart the 24-hour news cycle, and yell THINK!???   This space will first and foremost attempt to be compelling by making you think and look at the nominating process from a different angle.   I am not without biases or preferences (though these can easily change based on how a politician performs once he or she has formally entered the 2012 arena).   My initial preferences and biases will be revealed in a later column, but I will be mindful of them and fair in examining the contours of the 2012 race.

The modern nominating contest is by no means quick and fast like a horse race.   Like the NASCAR season, it is a long grind and haul with its fair share of collisions, burnouts, and heated confrontations.   Strategies, tactics, and personalities matter, as do steady hands and advisers that can act as “eyes in the sky.???   And while the notion that a random citizen candidate can just enter the field and win (just like the romanticized idea of a driver without a sponsor who comes to the track with a fixed-up car and wins in NASCAR) is clung to, today’s nomination process requires candidates to be well-oiled corporations of one.   Similarly, the field of contenders in both contests starts out large, but the wannabes are soon exposed, and the field eventually winnows down to a couple of contenders at the end.   And NASCAR’s fan base is similar in spirit to the GOP base.   Here are 10 more reasons why the presidential nominating contest is similar to NASCAR; it is why this space is called The Chase 2012. Welcome. Let’s raise the green flag.

1.   Crew chiefs and pit crews:   No NASCAR driver can succeed without a great crew chief and pit crew.   Successful 2012 candidates likewise need an enterprising campaign manager and skilled operatives to help them avoid the perils and pounce on the opportunities that they will certainly encounter.

2.   Working together to get rid of an opponent:   Especially on tracks that require cars to have restrictor plates on them, strange alliances can occur between or among drivers.   Same thing in politics.   Fred Thompson surely helped John McCain in 2008.   Steve Forbes helped George H.W. Bush fend off Pat Buchanan in 1992.   Wesley Clark helped John Kerry ward off John Edwards in 2004 on the Democratic side.   In this cycle, which candidates will gang up on Sarah Palin if she runs?   Could a candidate like Mitch Daniels, who has repeatedly de-emphasized “social issues,??? align himself with someone like a Jim DeMint?   Intrigue surely awaits.

3.   Controversy creates buzz:   NASCAR got on the map in 1979 when, during the Daytona 500, which was televised while much of the East Coast was being hit by a snowstorm, Cale Yarborough and Donnie Allison knocked each other out during the final lap.   Richard Petty scooted on past to win.   But the fireworks happened after the race, when Yarborough fought the Allison brothers (Donnie and his brother Bobby).   Likewise, the press will cover a spat or a fight over a policy prescription.   But another lesson that can be taken away from this is that when two people go at it full tilt, they just as easily mutually assure each other’s destruction (see Howard Dean and Dick Gephardt in the 2004 Democratic primary in Iowa).

4.   Sponsorships:   NASCAR is known for its sponsors.   And 2012 candidates will be jockeying to get endorsements from influential groups such as the Club for Growth, the Tea Party Express, and the Susan B. Anthony List that they can tout prominently, just as NASCAR drivers showcase their endorsers.

5.   Adjusting strategies:   Whether it is due to an ill-timed caution flag, gas mileage, or inclement weather, successful NASCAR teams have to nimbly adjust strategies on th fly.   Likewise with politics.   After John McCain knocked off George W. Bush during the 2000 New Hampshire primary by running as a reformer, Bush pivoted and claimed to be a “reformer with results.???   During the 2004 Democratic primary, John Kerry surged past Howard Dean by reinventing himself and asking Democrats to send a leader to Washington instead of a message.   In 2008, John McCain had to readjust his initial plans in order to win the GOP primary on a shoestring budget.

6.   Navigating a new scoring system:   NASCAR scrapped its decades-old scoring system in favor of a new one this year.   Similarly, the GOP tweaked its rules a bit for the 2012 cycle.   After the first four primaries, delegates will be apportioned proportionally until April.   This will likely give candidates with money and the organization that it buys more opportunities to not be knocked out early or recover from such an early blow.

7.   Nationwide Series:   The Nationwide Series has been a great minor league system for NASCAR.   Current superstars such as Carl Edwards and Kyle Busch started out there, as have budding superstar Joey Logano and potential star Danica Patrick.   Likewise, the many flawed candidates that will potentially run in 2012 highlight just how deep is the potential GOP bench for 2016.   Some superstars for that cycle include Chris Christie, Marco Rubio, Paul Ryan, Bob McDonnell, Ken Cuccinelli, Nikki Haley, and Bobby Jindal, just to name a few.   Jon Huntsman and Jeb Bush (assuming neither runs in 2012) are also notable 2016 contenders.

8.   Diversity, particularly in regard to Hispanics:   NASCAR, like the GOP, has tried to appeal to the fastest-growing minority group in the U.S., Hispanics.   In recent years, NASCAR has touted Juan Pablo Montoya, who is of Colombian descent.   It has also held races in Mexico.   The GOP cannot be an enduring party if it does not make inroads into the Hispanic community.   It must do so, though, without pandering and straying from its conservative foundation.

9.   Suburbs:   In recent years, NASCAR has expanded its reach to attract more suburban fans and viewers.   The GOP must get the same type of suburban voter NASCAR has courted to maximize its electoral success this decade.

10.   Expanding the brand while staying true to core principles:   As NASCAR has become the second-biggest sporting event in the country, it has carefully kept a foot in two worlds.   It has had to stay true to its “moonshine,??? anti-establishment spirit while also embracing a corporate culture.   Republicans face this same dilemma.   The challenge for the GOP will be maintaining its Southern center of gravity while expanding its brand to other regions.   In a similar vein, the GOP has to find a way for its anti-establishment Tea Party conservative wing to be compatible with its establishment-and more Republican than conservative-wing for the party to be successful both in the electoral and policy arenas.

The Opposition We Need