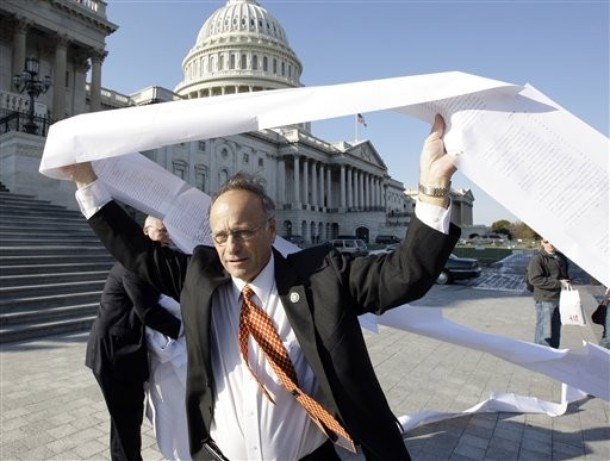 Rep. Steve King (R.-Iowa) fought against House leadership for a week in order to get a vote on his amendments to defund ObamaCare, and finally won the battle.

On Friday the House passed two of King’s amendments to the Continuing Resolution (CR) that would defund President Obama’s health care law.

“I used the word ‘nonnegotiable’ several times,” King told HUMAN EVENTS after the votes in explaining how he finally won a floor vote.

The ban on funds for ObamaCare would be in effect through the rest of the current fiscal year, which ends on Sept. 30.

“I didn’t threaten to shut this place down.  I just negotiated.  It’s more the cumulative effect of making strong and persistent arguments,” King said outside the House chamber, wearing cowboy boots with a blue suit.

The House has been voting for four days on amendments to the CR, falling far behind the scheduled 3 p.m. Thursday target for the final-passage vote.  The Republican leadership determined that the CR would be part of an open process so that members could offer various amendments to increase or decrease spending for specific programs. The base text of the CR would cut government spending this year by $60 billion.

As such, there were 583 amendments offered by Tuesday when the debate started.  In order to move the process along, the leadership decided to streamline the amendments to lessen overlap and not waste time on less important ones.

The Appropriations Committee started to negotiate with members on Wednesday to get what’s called Unanimous Consent (UC) to have a shorter list of amendments get a vote on the floor.  UC requires that every member agree to the final package.

Behind closed doors, negotiations to get UC went on all day Thursday, and a final agreement was announced at 12:15 a.m. on Friday.  There are 129 amendments in the UC agreement that were being debated and voted on Friday and likely into Saturday.

On Friday, it came to light that UC negotiations dragged on for two full days because of King.

He said that GOP leadership “looked at the proposal that I made for UC, and they tailored it to something that they hoped I would accept.”

King said he negotiated directly with Majority Leader Eric Cantor (R.-Va.) and Majority Whip Kevin McCarthy (R.-Calif.).  He said that there were “several iterations” in the negotiations.

“They sent an e-mail back to me and said, ‘Here’s what we think we can get done, but we want to be sure you’re okay with it.  I e-mailed back and put a couple conditions on it.  And then we negotiated UC,” said King.

What were King’s conditions?  He said that he wanted both of his amendments on the floor because he was afraid that the House could “chop me off with a point of order and then I have to walk off the floor.”  King said that if one of his amendments was ruled out of order, he would have “no fallback position to debate on” the floor.

“I don’t want to tie up the debate forever on this, but neither do I want to give up these two vehicles,” King said he told the leadership.  He said that “they saw the logic in that.”

King said that he got the final agreement by e-mail “one hour before the UC was announced,” at approximately 11 p.m. on Thursday night.

“I didn’t threaten them,” King told HUMAN EVENTS.  “I don’t think that it was adversarial.  Although I’m not afraid of confrontation.”

What drives King to fight so against all of Congress for his ObamaCare repeal vote?

“I’ve spent 18 months fighting this malignant tumor,” he said of the Democrats’ health care law which became law last Spring. “I believe that if it’s allowed to be enacted, it forever alters the trajectory and destiny of this country. I feel that so deeply in my philosophical soul.”

“I feel my nerve endings tighten up, and my muscles start to contract, and my blood pressure goes up when i think about what they have done to this country. So when there’s a legverage point, its pretty hard to get me off that leverage point because we may never have that again.”

King’s weeklong battle to get his ObamaCare defunding amendments began last Thursday when he brought three amendments to the Rules Committee.  King’s first amendment (No. 266)—which would have prohibited any federal funds from being used to implement ObamaCare—needed special protection from parliamentary procedural problems to get on the floor.

The amendment would have been vulnerable to two “points of order” that can  make legislation out of order and not get a vote.  King’s amendment had two problems:  It was legislating on a spending bill (the House splits those responsibilities) and it would supposedly cost $10 billion to implement, according to an outdated Congressional Budget Office (CBO) analysis.

Despite the appeal, the Rules Committe said that it would not give special protection to any amendments, including King’s.

Also, the committee put in order the ObamaCare defunding amendment from Rep. Denny Rehberg (R.-Mont.), who is chairman of the House Appropriations Subcommittee on Labor and Health and Human Services.  Rehberg’s amendment, which more narrowly prohibits any funds from the Labor and Health and Human Services agencies to be used to implement ObamaCare, became the focal point of the Republican efforts.  Rehberg’s amendment also passed the House on Friday afternoon by a vote of 239 to 187.

King blames timing for the Rules Committee not giving special protection to his first amendment.  He said that he had asked the Congressional Research Service (CRS) to provide an accounting of the automatic appropriations in the health care law.  He said that CRS report showed that the “total automatic funding for ObamaCare would cost $105.5 billion over 10 years.”

He said that he got the final report too late for the Rules Committee to see it before ruling.  “The final report didn’t come down until last Thursday, but it was too late to take to the leadership.  Around this town, if you have an independent report, on real paper, to wave in front of them and pound on the table, it really makes a difference.”

Asked why he thought that his should have been the one amendment protected, King was unapologetic.

On Friday, King was able to overcome the procedural problems with his amendments by coming to the floor armed with a memo from Budget Committee Chairman Paul Ryan (R.-Wis.).  According to King, Ryan’s memo had comments that said that his amendments would not cost money.  He said the parliamentarians used the Ryan memo to overcome the procedural points of order so that he could get a vote.

“They said it was going to result in an increase in spending.  I was able to defend my amendment because we had a memo with a comment from the Budget [Committee] chairman,” said King.

Despite the spending controversy, King is a big fan of the work of the CBO, which does the accounting for House spending legislation.  In fact, King had a note on his left palm in blue ink that said “Doug Elmen.”  He said the note was to remind him to call CBO Director Doug Elmendorf to say that he was doing “yeoman’s work” during the CR debate.

Asked whether he knew that Sarah Palin had been mocked for writing notes on her hand, King said he was aware, but did not care.

“It’s just the handiest thing,” King said, seemingly unaware of the pun.  He explained that the handwriting habit came from his years working in the moving business.  “You don’t need to carry a notepad, and the wind doesn’t blow it away,” he added.

Looking to the future, King said that “we’ve had four votes in the House now to shut off all funding for ObamaCare.”  He was referring to Rehberg, his two amendments, and an amendment by Rep. Jo Ann Emerson (R.-Mo.), which prohibits the Internal Revenue Service (IRS) from using funds to implement ObamaCare.  The Emerson amendment (No. 83) passed on Friday by a vote of 246 to 182.

After the House passes the final CR, it still needs to be passed by the Democrat-controlled Senate, then signed by Obama.

Asked whether he thinks that President Obama would sign a CR that defunds his own health care law, King sat back and smiled.

“Ahh, yes I can.  I close my eyes and I can just see that left hand going right along,” he said while pantomiming a signature in the air.

Does King really think Obama would sign to defund his prized legislation?

“Well, Socrates drank the hemlock,” said a smiling King.  “I guess if Obama has to sign the defunding of ObamaCare, it won’t be fatal.”