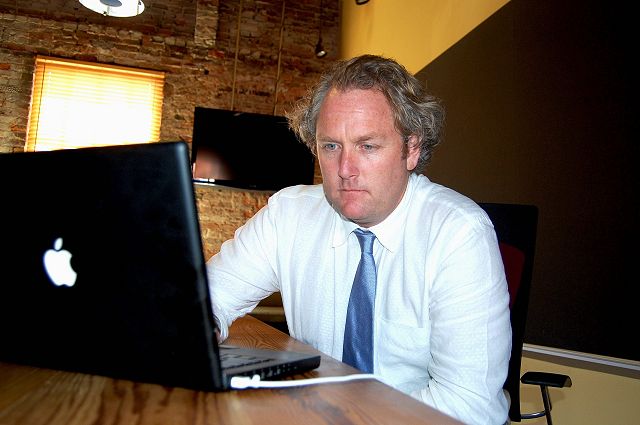 I have endeavored in this column to pull back the curtain a bit on the pop culture sensibilities of some of the most serious political players of our day—to show that even kings and kingmakers, amid long afternoons with important Economist articles, still peek at Internet gossip sites, love a good movie, and can remember when the power that mattered most to them was the power of their stereo speakers in college.

But there is one man who has built a career around the marriage of pop culture and politics, and thus has earned the unofficial moniker of “poster boy” for De Pasquale’s Dozen—Andrew Breitbart.

Andrew is an unlikely conservative from Brentwood, Calif., who prefers cutting down the talking heads on cable news rather than cutting off the heads of his neighbors (like at least one of his former Brentwood residents).  Married with four children, he’s moved closer to the heart of American pop culture with a home in Hollywood’s bedroom, Westwood.

An adopted infant with Irish bloodlines, he was raised a secular liberal California Jew.  But a hard-partying college stint at Tulane University and a hypnotic fascination with the televised Clarence Thomas confirmation hearings led to a conservative rebirth.

An early contributor to and architect of both the Drudge Report and AOL’s latest acquisition, The Huffington Post, Andrew has brought ideology and muckraking to the electronic age.  He directs an online quintet of websites that found their inspiration in the Left’s conflation of “bigness” with “badness” (as in “Big Oil”).  Big Hollywood, Big Government, Big Journalism, Big Peace, and the original Breitbart.TV serve up a steady stream of stories and commentary that simultaneously educate the masses while lampooning the obsession of “progressives” with policy prescriptions that border on fantasies.

I can promise you that his speech at the Conservative Political Action Conference this year will be explosive.  Be sure to watch on CPAC Live (www.cpac.org) tomorrow at 9 a.m.

A favorite behind any Tea Party megaphone, I give you the acerbic and often hilarious Andrew Breitbart … by the dozen.

1.  If there were a television channel that only showed one movie over and over, what movie should it be?

2.  What’s one of your favorite movie quotes?

A primer on Nick Swardson as Jeff in Grandma’s Boy one-liners:

3.  In A Clockwork Orange, Malcolm McDowell is strapped in with his eyes propped open and forced to watch images until he is “cured” of his “ultra-violence.”  If you could give President Obama, former House Speaker Nancy Pelosi, and Senate Majority Leader Harry Reid the “Clockwork Orange treatment,” what movie would you make them watch?

The Lives of Others.

4.  What pop culture souvenir do you own that people would be surprised to learn that you cherish?

Signed poster from the most irreverentest of irreverent pothead comedies, Grandma’s Boy, starring my friends Allen Covert, Joel David Moore, and Peter Dante, among others.  Nick Swardson, Dante, and Moore own the film.  Still looking to get the signature of Abdoulaye NGom, who played Dr. Shakalu, to perfect the item.  He works in my neighborhood.  Great guy.

While I don’t watch any shows regularly, it’s hard not to savor “Modern Family” and “30 Rock” when my wife and oldest son are watching them.  They’re both written near perfectly.

6.  Which movie, television show, or rock music star would cause you to lose your ability to speak if you ever met?

Neil Finn, of Crowded House and Split Enz fame.  He’s the most underrated singer/songwriter in the world over the last 30 years.  I already acted like a moron when I interviewed him for an entertainment magazine about 17 years ago.  I’d like to think I’d act less spazzy next time.

7.  What was the first rock concert you ever attended, where did you sit, and who went with you?

Madness at the Ackerman Union on the UCLA campus.  It was an open hall with no seats.  I went in seventh grade with Jason Horwitch.

8.  Tell me about a public or private moment when you thought to yourself, “This is what Elvis felt like every day.”

Inadvertently, I’ll find myself with a posse following me to the stage at the larger Tea Parties.  So I kinda feel like Elvis—without the burden of having sex appeal and any artistic talent.

Speaking at the first National Tea Party Convention in Nashville in winter 2010.  That was the speech where I got the packed room to turn around and stare down the row of media in the back of the room, and I said, “It’s not your business model that sucks, it’s you that sucks!”  It brought down the house, and I realized then and there the power of an effective speech using a formula of humor and righteous indignation.

9.  What are you two favorite non-news websites?

Coming soon, my first nonpolitical website: www.CelebritiesWhoFlyCoach.com.  Inspired by a recent flight to NYC, where I found out I was sitting next to the lead singer of Blue Oyster Cult, while noticing actor Peter Strauss of The Jericho Mile was across the aircraft from us.

10.  What’s the coolest thing you’ve been able to do because of your role in the political arena?

Exposing the organized Left is my fetish.  Watching John Podesta’s entire well-funded Sorosian empire alter its day planner around my work to expose them as duplicitous and dangerous is pure joy.  On a nonpolitical, non-job-oriented note, I’ve gotten to know a bunch of professional baseball players.  I like hanging with middle relievers best.  If I wasn’t in politics-based media, I’d have been quite happy pitching in the seventh inning in moderately close games.

11.  What question do you wish reporters would ask you?  What’s your answer to that question?

Will you accept our heartfelt apology for a generation or more of using the false construct of “objectivity” to attack conservatives mercilessly in the name of “social and economic progress”?

No thanks.  I’m a secular Jew who’s not burdened by the Christian call for “forgiveness.”  The American people have awoken to your ideological schemes, and you’re going down.  Good luck learning a pliable skill set in your mid-life career changes.  Other than that, how’re the kids?

12.  Tell me about the moment you decided to enter the political arena.

I took a job to help build Arianna Huffington’s website back in 1997—back when she was a conservative.  The first day of my new job she bait-and-switched me.  I was now her “researcher.”  Oh well, I thought, I’d give it a shot.  Within two weeks Arianna got No. 1 Clinton donor Larry Lawrence dug up from Arlington National Cemetery for faking a war hero record.  The CNN aerial footage of the event was magnificent, especially watching as the media establishment, Judy Woodruff, Maureen Dowd, et al, naturally defended the fraudster until they could defend him no longer.  I decided then and there I wanted to be in the business of disinterring political phonies and shoving it into the mainstream media’s face.

Donald Trump at CPAC: America Will Be Respected Again