Newt Gingrich At CPAC: America Only Works When America Is Working 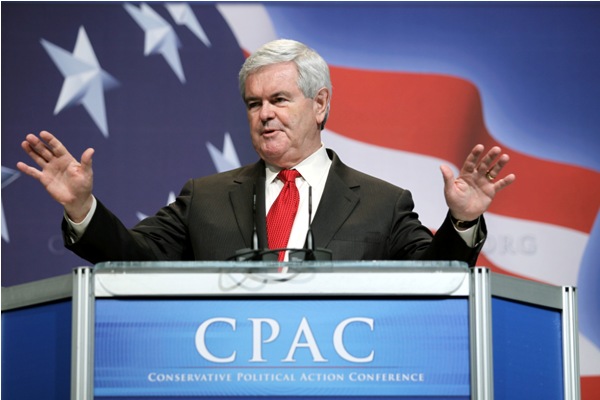 Newt Gingrich had a fantastic entrance at CPAC, taking his time to pass through a crowd that loved him, to reach the stage, while the loudspeakers pumped out “Eye of the Tiger.”  He did not come to mince words, or tolerate the distortion of history.

Gingrich was angry at how the achievements of his Congress have been squandered.  Sixteen years after his Republican caucus “cut Democrat spending to balance the budget” and “strengthened national security,” the Germans are preparing to buy the New York Stock Exchange, while Homeland Security Secretary Janet Napolitano says “we have more terrorists operating in the United States than ever before.”

He blamed high unemployment and economic malaise on the “anti-capitalist, anti-small-business, anti-job” Obama Administration, which is “at war against American energy production,” and learns just enough about any given industry to denounce it.  Gingrich pronounced himself “sick and tired of ‘job creation committees’ run by people who have never created private sector jobs.”  He asked why investors would take risks to create jobs when “the next left-wing bureaucrat can come along and take everything you’ve done.”

He’s also fed up with liberal media attempts to give Bill Clinton credit for the balanced budget he and the Republican Congress achieved through fiscal discipline, outlining specific spending cuts in detail.  Gingrich is a true believer in an idea Democrats only toss around as empty rhetoric when they need to keep their poll numbers from sliding: job creation is the key to growing our economy, and almost every action of a statist government destroys jobs.  “If you want to kill jobs, you can,” he allowed with a rueful chuckle.  “The Democrats do it all the time.”
Gingrich generously extended an invitation to Barack Obama to serve as the keynote speaker for CPAC in 2012… provided he earns it, by moving to the center.  Pointing to the immense popularity of initiatives like the repeal of ObamaCare, repeal of the death tax, and a rational energy policy that involves actually producing more energy, he asked, “If the center is not with a 58%, 65%, or 70% majority, then where is it?”

He outlined a simple diet plan for Obama to shed that unsightly socialist flab and get into fighting shape for the next CPAC: repeal ObamaCare; sign sweeping tort reforms to reduce the legal burden on business; permanently repeal the estate tax, a reform supported by the majority of Americans for over 30 years; sign a new Hyde Amendment forbidding the expenditure of tax money on abortions; sign Paul Ryan’s plan to balance the budget through spending cuts; sign a law to “decisively control our borders”; and sign a “10th Amendment Implementation Act” to devolve power back to the states and people.  That doesn’t sound like a very difficult program to complete.  CPAC 2012 should be a blast with Obama doing the keynote!

Gingrich usually has a big idea tucked in his wallet, and lots of little ideas jingling around in his pockets.  His Big Idea today was replacing the Environmental Protection Agency with an “Environmental Solutions Agency,” which would become a de-centralized, supportive partner in the development of new technology that would “improve the environment and create jobs, within the framework of a limited constitutional government.”  Understanding that “innovators and entrepreneurs can solve problems better than bureaucrats,” the Environmental Solutions Agency would abandon the top-down stasis of the existing EPA.  It also sounds like it would cost a lot less, and spend less time in court suing businesses into oblivion.

As part of a rational energy strategy, Gingrich spoke in favor of expanding nuclear power, including reforms to “streamline the process of building new nuke plants.”  He also made an interesting point about the importance of detaching small nuclear plants from the enormously complex regulations which govern the operation of large ones, since treating them all the same makes the smaller ones prohibitively difficult to construct and operate.

He is also strongly in favor of allowing states to resume oil exploration off their coasts if they desire.  “We have an eleven hundred year oil supply eight thousand feet down,” but we’re afraid to drill for it because “something bad could happen.  Well, something bad is happening: Americans are losing jobs.”

Gingrich is also deeply concerned about the blindness of American foreign policy, which seems determined to forget about the enemy that struck on 9/11.  He recounted the story of the Pakistani-born terrorist who tried to plant a bomb in Times Square, and how he responded to a judge’s question about his immigrant’s oath of loyalty to the United States by explaining, “You are my enemy.  I lied.”

Referring to New York Mayor Michael Bloomberg’s knee-jerk attempt to pin the Times Square bombing attempt on “anti-health-care activists,” Gingrich said, “This would be a sign of mental illness, if it didn’t come from a public official.”

The most memorable line from Newt Gingrich’s speech was, “America only works when America is working.”  Twenty months of dismal unemployment demonstrate that it isn’t working terribly well right now… and that is not because the government is neglecting us.  We aren’t being ignored, we’re being strangled.  It’s time to pry the clammy fingers of the titan State from our throats.

Kristi Noem at CPAC: A Destiny Undreamed Of