Connect with us
The gospel of the Holy Church of Global Warming promised us the tropics, but all we got was the Arctic Circle. 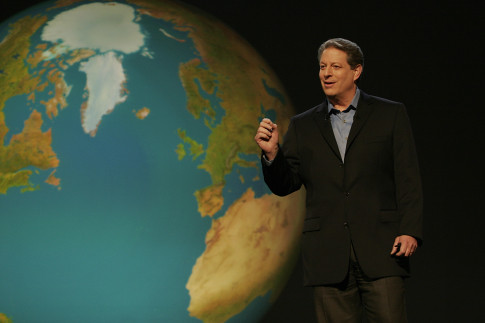 Ice and snow cluttered the retractable roof of Cowboys Stadium and delayed fans traveling to Dallas for Super Bowl XLV.  Super Bowl weekend is supposed to be shorts and a Hawaiian shirt, not ski cap and winter coat.

In Utah, Questar Gas set a single-day high mark for natural gas delivery to chilly customers.  The weather kept the print edition of the Tulsa World from reaching the public for the first time in a century.  More snow fell upon Chicago during February’s first two days than normally falls the entire month.  A combination of unusually heavy snowfall and the frigid cold stubbornly holding off a melt has unleashed a wave of roof collapses in Massachusetts.  Tucson’s mercury broke local records by dipping below 20 last week.

These are the times that try a man’s faith, particularly if that faith is in the Holy Church of Global Warming.

High priest Al Gore has emerged, presumably from a cloistered winter retreat—there’s a reason he shows up more in June than January—to assure the faithful that far from invalidating global warming, blizzards further validate it.  He blogged that “the scientific community has been addressing this question for some time now and they say that increased heavy snowfalls are completely consistent with what they have been predicting as a consequence of man-made global warming.”

To buttress this point, Gore strangely cites as an authority the political pundit Clarence Page.  (Was Eleanor Clift unavailable?)  “A rise in global temperature can create all sorts of havoc, ranging from hotter dry spells to colder winters, along with increasingly violent storms, flooding, forest fires and loss of endangered species,” Page maintained in an AlGore.com-linked column.  “That’s simple science for me, a guy whose scientific education pretty much ended with the old ‘Watch Mr. Wizard’ TV show and a subscription to ‘Popular Mechanics.’ ”

When evidence against a theory is interpreted as proof of a theory, there is no point in continuing the debate.  All roads lead to Rome, or in this case, all facts prove global warming.  It’s worse than unfalsifiable theories.  It’s worse than circular reasoning.  It’s true believer syndrome.

In his mid-century classic, The True Believer, Eric Hoffer wrote, “The effectiveness of a doctrine does not come from its meaning but from its certitude.  No doctrine however profound and sublime will be effective unless it is presented as the embodiment of the one and only truth.”

Global warming, at least as it is advanced by Gore and company, isn’t a theory to be questioned, but a truth to be accepted.  Thus, condescension substitutes for debate.  Appeals to the number of scientist supporters supplant appeals to reason.  And skeptics become “deniers,” i.e., morally on par with cranks who deny the Holocaust.

For all the talk of “science,” the primitive divinations of today’s weather have proved to be the Holy Church of Global Warming’s most persuasive means of proselytizing.  A spree of especially hot summers did more to convert the heathens than any Paul Ehrlich holy book or televised Al Gore sermon.  It would be fitting should mere cold spell anecdotes erode faith in the pseudo-scientific fad.

More than five hundred years ago, Christopher Columbus used meteorological phenomenon to induce the natives to do his bidding.  Wanting food and labor, Columbus threatened the indigenous Jamaicans that his god would make the moon disappear if they didn’t do what he wanted.  They balked.  He awaited the scheduled eclipse.  Frightened, they pledged themselves to him in exchange for getting the moon back.

Other than our pretentions of advancement, what’s the difference between those primitives and us?  Columbus duped them with tales of horror in the skies.  Similarly, Al Gore and company tell tales of meteorological chaos if we don’t agree to policies that they would support even without the issue of global warming.  “Your village green will turn into a desert if you don’t do as I say” is at least as persuasive as “I’m going to make the moon disappear if you don’t feed me.”

Al Gore promised us that if we continued to expand our carbon footprint, we would get Miami’s weather.  If only he had threatened us with Thunder Bay’s.  We might have done as he commanded.

The Reagans vs. the Kennedys

Still Point in a Turning World: Ronald Reagan and his Ranch

Daniel J. Flynn is a columnist for HUMAN EVENTS and the author of Blue Collar Intellectuals: When the Enlightened and the Everyman Elevated America (ISI Books, 2011).