Connect with us
After the health care law was ruled unconstitutional in Florida, the Senate will vote on full repeal and 1099 repeal, and has introduced a bill giving states the right to opt out. 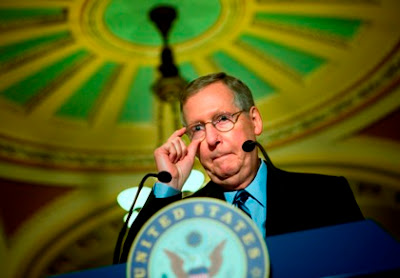 The McConnell Amendment was brought up in a parliamentary procedure that requires 60 votes for passage.  The Senate will vote on the amendment today, but it is not expected to get enough Democratic support for passage.

“Yesterday, federal court in Florida found the crux of the law to be unconstitutional,” McConnell said yesterday on the floor.  “So we have an opportunity today.  For all those who supported the health law, it’s an opportunity to reevaluate your vote, to listen to your constituents who are desperately trying to get your attention.”

Sen. Dick Durbin (D.-Ill.), Reid’s deputy, predicted late yesterday afternoon that all 53 of the Democrats would vote against ObamaCare repeal, except for “one lost soul or two.”

Both before and after the House passed ObamaCare repeal, Majority Leader Harry Reid (D.-Nev.) said that he would never allow a vote on repeal in the Senate.

Despite Reid’s opposition and mainstream media reports, McConnell said that he would force a vote on the House-passed repeal. “The Democratic leadership in the Senate doesn’t want to vote on this bill.  But I assure you, we will,” said McConnell on January 19.

Reid conceded yesterday that the repeal vote was inevitable.  “The Republicans obviously want to do something on health care.  So we want to get this out of their system really quickly,” he said.

Durbin explained that the Democrats gave up the fight to block a vote on the repeal out of mere practicality.  “Republicans are duty-bound to offer this repeal amendment.  They did it in the House.  They’ll do it in the Senate.  Just deal with it,” he said.

Also, Reid announced yesterday that the Senate will vote on an amendment to repeal the section of ObamaCare that burdens small businesses with filing excessive 1099 tax forms.  The amendment, sponsored by Sen. Debbie Stabenow (D.-Mich.), will come to a vote today, and is expected to pass with strong bipartisan support.

Although the House passed the full repeal of ObamaCare, the 1099 repeal would need a separate vote in order to get it signed by President Obama.  A spokesperson for the House Ways and Means Committee, which is the committee charged with sending a repeal measure to the House floor, said that it is a “top priority” and that “the committee intends to act soon on 1099 repeal.”

In addition to the surprise timing of the repeal vote, Senators John Barasso (R.-Wyo.) and Lindsey Graham (R.-S.C.) introduced legislation yesterday that would give states the right to opt out of the individual mandate section of the health care law.

The bill introduced by Barasso and Graham, the State Health Care Choice Act, would allow states to opt out of the major provisions of ObamaCare.  States could opt out of four provisions of the health care law: individual mandate, employer mandate, Medicaid mandate, and benefits mandate.

The Senators made it clear in a press conference yesterday that the ultimate purpose of their bill was to help to further the full repeal of ObamaCare.

“If you took half the states out of this individual mandate requirement, this bill falls, requiring us to draft something new. And, quite frankly, that is the goal—to find a way to get the Congress to redo this bill,” said Graham.  “And I can’t think of a better way than to have the people speak at the state level as to what they would like or not like.”

Reid refused to say whether he would allow a vote on the states opt-out bill.  But Barasso and Graham are going to reach out to Democratic senators and try to get as many co-sponsors as possible to push for a vote on the floor.

Graham also anticipates that the states will be lobbying their senators for the opt-out option.  “Governors are going to come to their senators and say we’d like to have this opportunity for our state,” he said.

Barasso, who is in the Senate leadership, would not say whether he had talked with McConnell about forcing a vote on the bill, but said the bill fits into the Republicans’ big picture.

“The number one goal is to repeal and replace the health care law,” Barasso said.  “That’s what we’re pushing to get a vote on. If Senator Reid is so proud of this piece of legislation, you’d think he would welcome that vote.”

“The bottom line is what we are trying to accomplish here for the American people,” said Barasso, who is a medical doctor. “We want people to get the care they need, from the doctors they want, at a price they can afford. And we know that ObamaCare doesn’t do that.”

Graham also predicts the bill will make health care a central issue in the states in the next election cycle.

The momentum against ObamaCare took on a new urgency yesterday after Florida joined Virginia in ruling that a portion of the health care law was unconstitutional.  Pensacola Judge Roger Vinson struck down the individual mandate of ObamaCare for being unconstitutional.

“This entire bill hinges on its core requirement that every citizen purchase health insurance.  If that’s unconstitutional, and two federal courts now say it is, then the whole thing needs to be scrapped,”  said McConnell.

Judge Henry Hudson of Virginia ruled the same way as Vinson in December, but the Florida judge added that the health care law is all tied to the individual mandate, so the whole law is unconstitutional.  The U.S. Supreme Court will likely make the final ruling on the constitutionality of ObamaCare.

Although the full repeal of ObamaCare is likely to be blocked by Senate Democrats, this effort will have both a practical and political future.

Practically, the House committees of jurisdiction can move full-force to defund ObamaCare through the appropriations process and replace it with common-sense health care reform.

Politically, the Senate Democrats are now on the record as being against the repeal of ObamaCare, which a majority of Americans support, and which has been ruled unconstitutional in two states.  This puts those Democrats up for reelection in 2012 in a more vulnerable position, which in turn puts control of the Senate in play.