Paul Ryan to Obama: Not So Fast 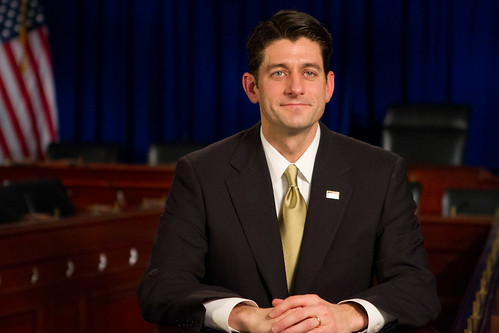 Earlier in the evening, Obama, in his State of the Union speech, argued that for America to “win the future,” the government would need to engage in more deficit spending and run up its proverbial credit card on various programs such as “green” energy investments that are dear to the hearts of liberals.

In a somber tone that seemed to befit an accountant who was staring at the cold hard facts associated with the budget and America’s debt, Ryan’s message to Obama seemed to be “not so fast, Mr. President.”

Ryan’s speech — like Obama’s — was centered around how to make America dominant and prosperous for the next generation of Americans and not lose its standing in the world.

Unlike Obama though, Ryan stated he believes America can be a more prosperous country for the next generation only if it first puts its fiscal house in order.

And he had the facts to back up his arguments.

“We need to reclaim our American system of limited government, low taxes, reasonable regulations, and sound money, which has blessed us with unprecedented prosperity.  And it has done more to help the poor than any other economic system ever designed,” said Ryan. “That’s the real secret to job creation – not borrowing and spending more money in Washington.”

Ryan criticized the last Congress, which was run by Democrats, for an “unprecedented failure” in “choosing not to pass, or even propose a budget.”

Due to this failure, “the spending spree continued unchecked,” said Ryan. “Our forthcoming budget is our obligation to you – to show you how we intend to do things differently, how we will cut spending to get the debt down, help create jobs and prosperity, and reform government programs.”

Earlier in the day the House passed a measure to set this year’s budget to 2008 spending levels or lower.

Ryan cited the fact that the unemployment rate remains above 9% despite Obama’s stimulus programs and said that due to the reckless spending of Obama and the Democrats, “our nation is approaching a tipping point.  We are at a moment, where if government’s growth is left unchecked and unchallenged, America’s best century will be considered our past century.”

Ryan warned against a future “in which we will transform our social safety net into a hammock, which lulls able-bodied people into lives of complacency and dependency.  Depending on bureaucracy to foster innovation, competitiveness, and wise consumer choices has never worked – and it won’t work now.”

According to Ryan, the government spent so much in the last two years to the point where Obama is urging Congress to increase the debt ceiling.

“We must hold to a couple of simple convictions: Endless borrowing is not a strategy; spending cuts have to come first,” said Ryan.

In a direct contrast from Obama, who essentially urged Congress to double down on the same course of more deficit spending, Ryan said that if Americans did not “chart a new course,” the mounting debt “will soon eclipse our entire economy.”

“No economy can sustain such high levels of debt and taxation. The next generation will inherit a stagnant economy and a diminished country,” said Ryan. “Frankly, it’s one of my greatest concerns as a parent, and I know many of you feel the same way.”

Ryan warned against America going down the path of countries such as “Greece, Ireland, the United Kingdom and other nations in Europe” that “didn’t act soon enough, and now their their governments have been forced to impose painful austerity measures: large benefit cuts to seniors and huge tax increases on everybody.”

In this looming crisis, though, Ryan said that while “some people will back away from this challenge,” he saw “this challenge as an opportunity to rebuild.”

Obama and Ryan will probably face off many more times in the future. For one, Ryan heads the Budget Committee and will have to work with Obama to hammer out the country’s budget. In addition, Ryan has been mentioned as a possible vice presidential candidate in 2012.

Ryan’s profile was raised last year when he sparred with Obama during the GOP’s Congressional retreat in which Obama showed up and took questions from Republicans. It was known as the “Question Time” event.

As the author of the “A Roadmap for America’s Future,” which politicians like Sarah Palin have endorsed even as many in the Republican establishment have been reluctant to embrace, Ryan has put forth concrete ideas in a party so often maligned as a “party of no” whose members speak only in generalities while being devoid of specific ideas.

Ryan has often talked about his admiration for his mentor, Jack Kemp, who was largely responsible for influencing Ronald Reagan on economic policy.

Ryan, who will turn just 41 years old this week, will have many years to follow in his mentor Kemp’s footsteps to try to influence Republicans on economic policy.

For one night, though, Ryan was effective in his opposition against Obama’s.

Inside the Chamber: A Subdued State of the Union