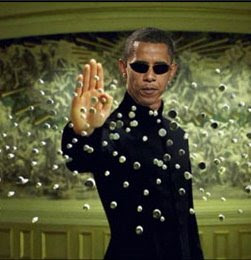 If BHO had the slightest bit of integrity, his State of the Union address tonight would be no longer than 30 seconds, and it would go something like this:

“My fellow Americans, my presidency has sucked. Big time. My stint as your leader has been worse than the Matrix Revolution, and you know how awful that Keanu Reeves movie was. To the American public, I’m sorry. The job of being President has been above my experience. I had no idea what I was supposed to be doing, and I still don’t. I’ve screwed over so many generations of Americans with the debt I’ve been racking up. So for the good of the country and because I’m tired of Michelle forcing me to eat organic arugula from the White House garden, tonight I am resigning. Take care America, and please don’t ever say that Jimmy Carter was a better President than I was, because that would really sting.”

I know – there’s a better chance that Keith Olbermann guest hosts the “The O’Reilly Factor” than there is of BHO’s resigning. But we can dream, can’t we?

In reality, Obama will take the opportunity of his second State of the Union to do what he’s really good at: Propose even more spending. And he’s going to do this under the rubric of “investments.”

How do I know this? His advisors have been “leaking” the themes of this evening’s speech, which the New York Times describes as a “call for ‘investments’ of tax dollars in specific areas like education, infrastructure and technology” as a way to boost economic growth.

But don’t be fooled. These aren’t investments. These are confiscations of private-sector capital that Obama has neither earned nor knows how to earn, for that matter.

The left uses the word “investment” each time they’re after your wallet. In fact, Obama sold the failed “stimulus” plan as a package of… investments!

Before he signed the inaptly named “The American Recovery and Reinvestment Act,” Obama called it “an investment that will create jobs building 21st-Century classrooms and libraries and labs for millions of children across America.”

He also dubbed the spending measure as “an investment that takes the important first step towards a national transmission superhighway,” while also claiming that “nearly 400,000 men and women will go to work rebuilding our crumbling roads and bridges” via the stimulus’s “investment.”

In total, Obama blurted out the word “investment” 20 times at the signing of the stimulus.

And now he wants more.

While Obama is attempting to use “the language of the center-right” to come across as pro-business, from what we’ll hear tonight, it’s clear that he is still committed to the shopworn idea of government spending creating wealth.

It doesn’t and never has. Societies prosper through free-markets and limited government.

Look, if government spending were a magic bullet, the Soviet Union would have been an economic juggernaut rather than a basket case where millions of people were ensnarled in unspeakable destitution. Heck, Cuba, Venezuela, and every other socialist tyranny around the world would be economic nirvanas today.

Even the Europeans are saying that federal spending inhibits economic growth. Dan Mitchell of the Cato Institute highlights a recent study from the European Central Bank which concludes that “expenditure-based fiscal consolidation” appears to “foster growth,” especially “in times of severe fiscal imbalances.”

In other words, “reducing spending promotes faster economic growth” and is the track Obama should’ve taken to lift our sagging economy.

The truth is, we can’t handle any more of Obama’s “investments.”  This guy is spending the country into oblivion.

If the spending doesn’t stop now when we’re running deficits of 1.3 trillion and owe $14 trillion in debt, when will it?

As economist Kevin Hassett rightly observes, “A welfare state that can’t shrink in a recession will possibly never shrink, which means that today’s high taxes provide an ominous foreshadow of even higher rates to come.”