Harry Reid at State of the Union: 'I'll Sit with Myself' 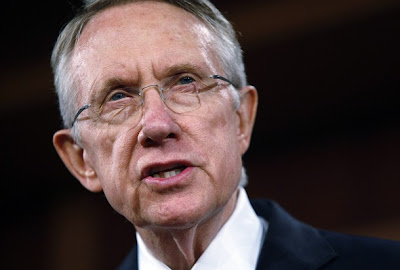 Some Republican and Democratic Members of Congress are sitting together during President Obama’s speech as a symbolic gesture of bipartisanship.

For the first time in history, the Members will not sit by party on one side of the aisle during the State of the Union on Tuesday night.

So, the most trendy question heard on Capitol Hill this week is: “Who are you sitting with during the State of the Union?”

I caught up with Senate Majority Leader Harry Reid (D-N.V.) as he was walking into the Senate chamber.

“Mr Leader, who are you sitting with tonight?” I asked.

“I think I’ll sit with myself,” Reid told me, grumpily.

“Then are you going to hold empty seats on both sides?” I asked.

Reid shot me an annoyed sideways glance, before walking into the chamber without responding.

The less socially inept Senate Minority Leader Mitch McConnell (R-Ky.) will “sit where he always sits – with other members,” said his spokesman.

McConnell did not have much patience for all the questions about the seats.

“More important than the appearance of sitting together is what we do together. The American people are more interested in actual accomplishments on a bipartisan basis in the next six to nine months than they are in the seating arrangements in the State of the Union” he said.

On the House side, the seating choices have been finalized after some jockeying.

Speaker of the House John Boehner (R-Ohio) will be in his assigned seat directly behind Obama, next to Vice President Biden.

Since losing the election, Minority Leader Nancy Pelosi (D-Calif.) lost her power and the big seat behind the President. Majority Leader Eric Cantor (R-Va.) invited Pelosi to sit with him, but she blew him off on Twitter. “I thank @GOPLeader for his #SOTU offer, but I invited my friend Rep. Bartlett from MD yesterday & am pleased he accepted,” Pelosi tweeted.

Cantor — who calls the brouhaha “the sitting thing” — took Pelosi’s rejection like a gentleman.

“Minority Leader Pelosi declined Eric’s offer, which would have resulted in the two party leaders sitting together,” said Cantor’s spokesman Brad Dayspring. Instead, Cantor “will be sitting at the traditional spot on the House floor reserved for the Majority Leader and will be joined by [Democrat] Rep. Bobby Scott, his friend and colleague from Richmond.”

The only Democratic and Republican leaders who are sitting next to each other at the State of the Union are Majority Whip Kevin McCarthy (R-Calif.) and Minority Whip Steny Hoyer (D-Md.).

The four sent a letter, co-signed by 50 colleagues, to the House and Senate leaders asking for their support for the bipartisan seating arrangements.

The custom of sitting by party affiliation with the aisle separation started when the first State of the Union was broadcast in 1911 on the radio, according to Udall.

By all accounts, the mixed party seating is a symbolic gesture. But, perhaps the one real consequence of crossing aisles will be less time wasted on standing ovations, and Obama’s speech will be shorter than last year.

“Sitting together is only symbolic. But often times at the State of the Union, the attention is less on the President’s words, than on who’s standing up, who’s sitting down, who’s standing there with their arms across their chests, who is engaged in the theatrics,” said Murkowski. “That’s not what the State of the Union should be about. So let’s come together for an hour or two.”

Two hours of Obama?! Let’s hope the kumbaya seating this year will keep the State of the Union to under one hour, which is something that would definitely get bipartisan support.