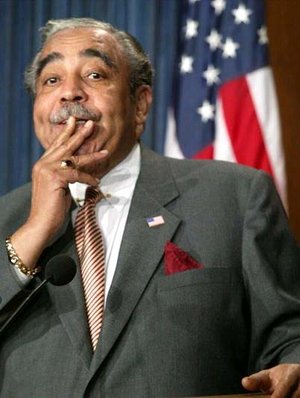 As Rep. Charlie Rangel (D–N.Y.) begins his ethics trial on Monday morning, he faces new allegations that he broke House rules in how he paid his legal defense team. Rangel violated more House ethics rules by using $393,000 from his leadership PAC to pay legal bills, according to The New York Post.

At his trial, Rangel will defend against 13 charges of ethical violations, which include not paying taxes on rental income for his villa in the Dominican Republic, using a rent-stabilized apartment for his campaign, and filing inaccurate financial disclosure forms for nine years in a row. The trial in committee will determine if the charges against Rangel are sent to the full House for a hearing.

Rangel has spent over $2 million of campaign and PAC money to defend himself over the past two years, according to Federal Election Commission (FEC) filings.

He used his leadership fundraising committee, National Leadership PAC, to pay $293,000 to his legal team at Zuckerman Spaeder in 2010.  The PAC also spent $100,000 in 2009 for President Clinton’s lawyer Lanny Davis’s services at the firm of Orrick, Herrington & Sutcliffe. The PAC paid law firm of Oldaker, Biden & Belair a total of $25,457 in 20 installments through 2009 and 2010.  Rangel is no longer represented by any of these firms.

The House Ethics Manual dictates that “the only campaign funds that a Member may use to pay for congressional expenses are funds of his or her principal campaign committee— not the funds of a leadership PAC or a multicandidate committee.” (Note: the words in bold are printed as such in the Ethics Manual.)

While the House bars its Members from using PAC money, it allows for a member to “use campaign funds to defend legal actions arising out of his or her campaign, election, or the performance of official duties.”

Rangel could have set up a legal defense fund, but instead used the funds from his congressional campaign and PAC. Did Rangel deliberately mislead PAC donors into thinking that they were supporting his political activities instead of paying for his legal defense? The congressman did not respond to this question as he prepared to stand trial against a jury composed of fellow Members of Congress.