REDSTATE MORNING BRIEFING
FOR SEPTEMBER 30, 2009
Sign up to get the morning briefing by email here.

2. Don’t Get Sick or Die Quick

4. Even The New York Times Notices That The Health Care Bill Has An Abortion Problem

People with low IQ got to see Whoopee Goldberg defend Roman Polanski on the View yesterday. Goldberg had no problem with the man filling a thirteen year old girl with alcohol and drugs before raping having sex with her. I say “people with low IQ” because demographically those are the only people who watch the View save for those few people forced to watch the show as part of their job. In any event, Goldberg’s blasé attitude about raping having sex with drug filled children and the implications of statutory rape has spilled over into the Obama administration, which is taking the position that statutory rape is of no great consequence and should, if the child consents, be encouraged. There is no other way to look at Barack Obama’s appointment of Kevin Jennings, the President’s “safe schools czar” who, the Washington Times reports unapologetically encouraged a homosexual relationship between a fifteen year old boy and much older man who, the boy reported to Jennings, picked the boy up in a bus station bathroom and promptly took the boy home. Considering Jennings wrote about this in his one and only published book and spoke about this prior to his appointment, we can only assume the Obama administration knew about it and has no problem with it. Please click here for the rest of the post.

2. Don’t Get Sick or Die Quick

Hey, remember when the Left’s big slogans were all about “Question Authority” and “Speak Truth to Power” and all that? Well, here’s the perfect gift for the left-wingers you know who have had those bumper stickers during the Bush years and want to get their mind right with the new Administration: 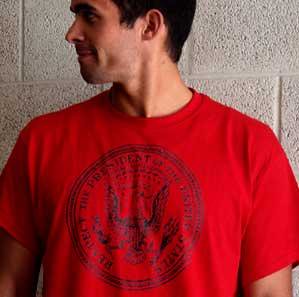 Yes, the shirt says “Respect the President of the United States.” And no, you just can’t get more rebellious and counter-cultural than that, now can you? That’ll show The Man! Please click here for the rest of the post.

4. Even The New York Times Notices That The Health Care Bill Has An Abortion Problem

Today’s New York Times essentially owns up to what conservatives have been saying, and what President Obama branded a lie during his joint address to Congress: federal funding for abortion is very much on the table in the health care debate. Let’s take a look . . . Please click here for the rest of the post.

Senator Rockefeller’s public option amendment offered in the U.S. Senate Finance Committee went down in flames today. The implications for Speaker Pelosi are profound. Her insistence on a public option in the House bill will force even more Democrats to vote no, and the chances that it will become law are small. Rockefeller is threatening to offer the same amendment on the Senate floor, but now Rockefeller is between a rock and a hard place since he has publicly said he will not vote for any health reform bill that does not have a public option. Senator Cantwell made the same threat. But, meanwhile Senator Harkin claims he has whipped his Democratic colleagues and he says “we have the votes” for a public option. Please click here for the rest of the post.

Being a moron should be a disqualification for a wide range of occupations. I think we can all agree that having morons as physicians is a bad thing. But morons are perfectly capable holding down useful employment, take for instance actors, sportscasters, and Keith Olbermann. It would seem that as a society we’ve determined that you can be both a moron and a politician without undercutting the republic to any great extent. I’d like to add two additional occupations to the banned list: law enforcement officials and prosecutors. Now our system of government can only survive morons in those positions if chance doesn’t intervene and we end up with morons holding both those positions in the same jurisdiction. If you want a case study in what happens when you run afoul of a moron cluster, look no farther Vermillion County, Indiana. Please click here for the rest of the post.

Every once in a while Democrats and the media assert that there’s never any election fraud or that it rarely results in cast votes. This is false. My favorite example is the 2003 Democratic Mayoral primary in which 32 people were convicted of voter fraud, and the election was subsequently thrown out by the court. It turns out that the Troy, NY municipal elections are highly contested this year. And when elections are close, and especially in primaries, the stakes get high. And the fraud starts. In this case, the fraud was over the Working Families line. And the ballots themselves explicitly link the fraud to Democratic Party officials and Working Family Party officials to that fraud. From the Albany Times Union . . . Please click here for the rest of the post.

Here’s the problem: Republicans are winning right now just because they are not Democrats. That won’t help us though, long term. At some point we are going to have to have ideas. People forget, though, that the Contract With America did not come about until the end of the 1994 campaign season. It was the summer of 1994 and it did not get traction until after Labor Day in 1994. Laura Ingraham is being pre-emptive. She has come up with a fantastic idea: Ten For 10. Ten For 10 is about ten ideas to run with for taking back Congress in 2010. Please click here for the rest of the post.